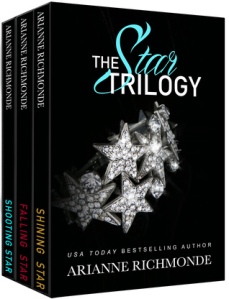 Two “reformed” Hollywood stars.
And one hell of a war of wills.
Movie director Jake Wild lives up to his name. A dangerously sexy playboy, he’s used to getting any woman he wants when he wants. Until he meets his nemesis: the beautiful, equally notorious Star Davis.
Ready to leave behind her party-girl ways and set to play the lead in his new film, Star doesn’t expect to fall for the charms of her director. And the last thing Jake wants—or needs—is for his life to spiral out of control.
Two beautiful misfits have met their match.
A match that lights a bonfire…
From the Hollywood Hills to the grasslands of Africa, the epic Star Trilogy takes you on a thrilling journey shrouded in secrets, masked by betrayal, and with unforeseen twists and turns that will make you question whose side you’re on.
Lights . . .
Camera . . .
Action . . .
Strap up your seat belt . . . you’re in for a bumpy ride.
#1 Shooting Star
#2 Falling Star
#3 Shining Star
~Excerpt~
I looked out of the open window as Los Angeles crawled past in the traffic and exhaled a sigh of momentary defeat. This town was doing my head in. Making me lose sight of reality. The palm trees towering into the azure sky like skinny skyscrapers reaching as high as they could go—everyone reaching beyond their means. Grabbing, aspiring, grasping, taking. Even the trees, goddammit. And the houses on Sunset with their manicured lawns, making you believe that life could be controlled, clipped, neatened. Like my father. A control freak who’d move a pencil one inch to the left if he felt it was out of place. Not on set, no. In his own freaking home! A pencil. And I tried to be like him. Organized. Sharp. On the ball. Controlled. A colonel-in-the-army type.
But that wasn’t me and never had been. I secretly welcomed madness with relish. Unintentionally courted it. Nurtured dysfunction as if it were a breastfeeding baby, willing chaos into my life the way some people attract money or women. Right now my mind was rattling with a sort of hectic glee. Star Davis represented turmoil and for some unknown reason it excited me—my curiosity piqued.
“I wanted an unknown for the role of Skye,” I told Brian, willing my thoughts back to safer waters. A nice, new actress with no baggage, no ego and no “history”—that’s what I need. “I’ve been auditioning at drama schools all over the world. I’ve seen sixty-two actresses. I’d narrowed it down to eight. And now you tell me I’ve basically wasted my time?”
“You tell the press that very same thing. ‘I saw sixty-two actresses and, you know what? None of them hold a candle to Star Davis.’ ”
“A candle that’s going to start a fire.”
“You’ll figure it out, Jake. I mean, let’s face it, she’s met her match—match, haha, no pun intended, Get it? She can set you alight.”
I didn’t laugh at his joke. “What’s that supposed to mean, ‘met her match’?”
“Bad boy Jake Wild—you’ve had some good times on the casting couch yourself, my friend. You can’t deny you’ve clocked up quite a reputation over the years.”
“The couch has been reupholstered, Brian. The past is the past. I don’t take advantage of starry-eyed actresses these days. I’m a professional. I get the job done and don’t screw around with the talent anymore. Ever. Well, as of last week. It’s my number one rule.”
“Well leave Star in peace, you know what I’m saying? She’s vulnerable. She’s fresh out of rehab and needs to be looked after.” He fixed his piggy gaze on me, a bushy eyebrow twitching ironically.
“Oh no! Don’t look at me, mate. There’s no way I’ll be her fucking nanny!”
“You’re the only one, Jake, who can keep her on the straight and narrow. We can’t have her going AWOL in the middle of a shoot. She’ll need to be watched like a hawk.”
“What about her sea of bodyguards? her PA, her father, for that matter?”
“None of them can be trusted. She’s too manipulative. Besides, they’re all on her payroll.”
“Her father too?”
“He’s her unofficial manager.”
“Great ‘manager,’ ” I murmured.
“Star’s been supporting her entire family ever since she did that diaper commercial when she was two years old. She has a strange perspective on life. She has never been told ‘no.’ So she’s used to being boss, and getting what she wants.”
“Well she’s not bloody bossing me.” I said that with bravado, yet here I was being ‘bossed’ by the system. Brian. The executive producers, the producers, the moneymen, the money women . . . the goddam accountants. The suits whose faces I’d never even seen. And indirectly, Star herself. She’d slithered her way into winning the part of Skye with her wily ways, by offering herself practically free. Clever girl. She’d probably sucked someone’s dick to get the part. She had me in a corner and I hadn’t even met her yet.
“And one more thing,” Brian added. “Apparently her house is about to be remodeled and she was planning to move into a hotel for a while. But I don’t trust the idea of Star Davis running around loose in a hotel, you know? Too many distractions—too much booze on tap.”
“What’s your point?” I said, meeting his eyes with a stony glare.
“I thought until every shot is in the can it would be a good idea if she stayed in your home—you can make sure there’re no temptations—no drugs or liquor anywhere near her.”
I stared at him incredulously as he smoothly took a bend, the Porsche revving with a quiet growl. He went on, “We can hire our own bodyguard— someone who can’t be bribed by her to slip her anything— he could live in your guest house—the one in your garden? And she could stay in one of your guest bedrooms. So, you know, she’ll be under your roof.” He was serious when he said this.

“No. Brian, you’re really pushing your luck. I have limits. I don’t want some wayward teenager telling me to fuck off in my own house. I’m not her father. I’m a film director. I have work to do. Storyboards to prepare, scenes to plan out. I have to stay on top of the shooting schedule, liaise with my assistant director, my lighting cameraman—Jesus, what the fuck? I don’t have time to deal with some drug-addicted, attention-seeking, Cristaldrinking brat!”

ARIANNE RICHMONDE IS THE USA TODAY bestselling author of STOLEN GRACE and the Pearl Series books: Shades of Pearl, Shadows of Pearl, Shimmers of Pearl, Pearl, and Belle Pearl – all full length novels. The first three books in the series are also available in one trilogy bundle/box set as The Pearl Trilogy. She has also written Glass- a provocative short story and most recently, the highly acclaimed suspense novel, Stolen Grace.

She lives with her husband and coterie of animals in France. She loves to travel and meet people and is thrilled that her books have touched readers from all parts of the globe.

~Giveaway~
Arianne Richmonde is giving away one print set of the Star Trilogy to one lucky winner during the tour. Enter the rafflecopter below for a chance to win.

One thought on “The Star Trilogy by Arianne Richmonde”